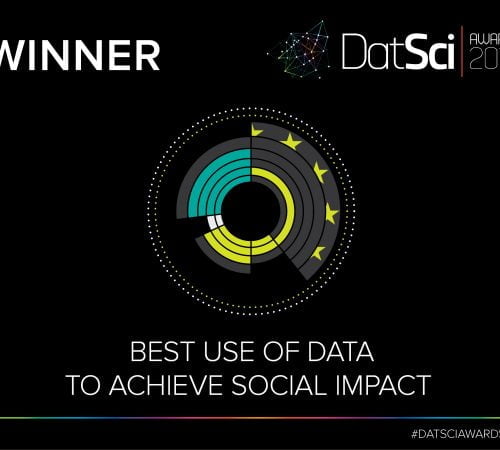 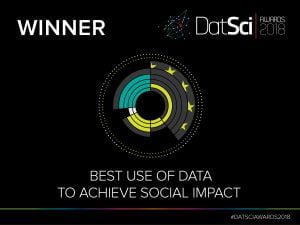 On Friday Sepetmber 7th, the National Biodiversity Data Centre and Compass Informatics were winners of the DatSci award for ‘Best use of data to achieve social impact’. Here we provide some background on the activities at the National Biodiversity Data Centre and some of the elements that the award recognises. The Centre has gone from zero to over four million records, over 8,500 contributors, and over 1,500 attendees at workshops.

The DatSci awards, sponsored by Deloitte, bring together the best and brightest data scientists in Ireland to recognise the important work being done in one of the fastest growing sectors in Ireland. The Best Use of Data to Achieve Social Impact, sponsored by Deutsche Bank, was a new award category in the DatSci awards, and attracted entrants from across Europe. The award was announced at a special award’s ceremony held in Dublin on 7th September, attended by upwards of 300 data scientist and industry representatives.

The Problem We Faced

Usable data on biodiversity is a requirement to allow evidence-based planning of our environment that takes the natural world into consideration. Back in 2006 there was no centralised facility for nationally-collated biodiversity records for Ireland – with data dispersed and recorded across various projects and organisations, each using different sets of standards and tools. This lack of centralisation and co-ordination greatly weakened the ability of organisations, voluntary groups, and citizens to contribute data to a meaningful information resource, where added value could be brought to the data, where the data could be shared and would be available for reuse. And importantly where it could be used to make sensible policy and planning decisions.

The Centre is now part of an international network, acting as a national node in the Global Biodiversity Information Facility (www.gbig.org), and leading the use of digital systems and analytics, and importantly in bringing these to bear on policy and social engagement with our shared biodiversity riches.

When the Centre commenced operations in 2007 there was no central repository of biodiversity records – now there are over 4 million records documenting over 16,000 species sourced from 144 different datasets; there was also no tradition of data sharing. From a position of having an empty building in our Waterford base, no computing, no data, we built a skilled and committed team, world leading data systems (as evidenced by our current standing in the Global Biodiversity Information Facility network) and secured the support of a highly knowledgeable and committed community of contributors.

Underpinning the delivery of the Data Centre’s work programme, is a state of the art bioinformatics infrastructure built around the management, publishing, co-ordination and reporting of biodiversity data and information. This infrastructure is offered by way of shared-services to partner organisations.

The Centre has also designed and established a number of monitoring programmes track environmental change. The Irish Butterfly Monitoring Scheme is the gold-standard in terms of citizen scientist monitoring tracking changes in butterfly populations. It also tracks the seasonal phenology of our butterflies thereby contributor to an understanding of impacts of climate change and land use change.

The National Sampling Framework is a shared-service provided to assist the design of national-scale systematic quantitative sampling for use by professional and citizen scientist. The Framework is underpinned by a Bioclimatic Map of Ireland which provides a regionalisation of the island of Ireland. This is currently supports ongoing thematic monitoring schemes.

Another gap has been filled by the suite of National Biodiversity Indicators developed by the Data Centre. The biodiversity indicators, which collated data from 19 state and non-governmental organisations, reflect the current state, and change in state, of biodiversity, and provides a quantitative measure based on verifiable data, which is objective, robust and minimises the subjectivity inherent in other lines of evidence. The current indicators are structured around eight Focal Areas, with Headline Indicators and sub-indicators. (See http://indicators.biodiversityireland.ie/). These indicators now provide an important source of evidence for reporting on biodiversity change, conservation action and informing conservation policy at national, European and global levels. They also contribute to the Sustainable Development Goals.

To highlight one final example from the overall work programme…

The mapping, dashboard and reporting tools within the Biodiversity Maps solution allow detailed access to biodiversity data by the public, while a suite of survey tools, citizen science portal, recorder leagues, and mobile apps allow quality data gathering and analysis in engaging and sometimes, even fun ways. (see https://maps.biodiversityireland.ie/).

The Centre’s impact is now far beyond its original remit, engaging and supporting a large network of citizen scientists.

The Centre now engages with all of the main holders of biological data from the public and private sector organisations and has 8,531 separate data contributors. In the last five years it has provided 106 training courses upskilling more than 1,500 individuals through its workshop programme which combines awareness of its data science tools with enhanced scientific and ecological knowledge. Particularly with the release of the new mapping and data access portal in Spring 2018 the level of usage to that portal has increased once again.

With data and data science at its core, the Centre has created strategic partnerships and indeed provided a forum and mechanism for organisations to collaborate – thereby changing the tone of engagement among many organisations. It is notable that agricultural bodies are among the Centre’s main supporters and funders of some of our projects, alongside conservation bodies.

Citizen engagement with the natural world around us is also greatly facilitated – from mobile apps, recording leagues, biodiversity hotspot mapping, and attractive data visualisation, to sometimes hard-hitting scientific data analysis. The biodiversity data science has also prompted events including university BioBlitzes, island BioBlitzes, and Ireland-Northern Ireland BioBlitzes. Initiatives such as the All-Ireland Pollinator Plan (www.pollinators.ie) have been surprising successes – getting widespread coverage and active engagement from farmers, tidy towns groups, to agri-businesses and state bodies. To track this success, a new mapping system was developed (Actions for Pollinators) as an offshoot of the National Sampling Framework. Those who have taken actions to help pollinators can log in, draw a polygon around their site and provide details and photographs of what they have done. Currently more than 2,500 actions across 350 sites from councils, local communities, businesses, gardens, schools etc have been logged. It is the first public system of its kind to facilitate the tracking of progress within a biodiversity plan where multiple sectors are working towards a common goal.

The Centre with its communities of support, is allowing Ireland move from ad hoc and ill-informed planning to balanced evidence-based planning. This is crucial to our long-term social wellbeing, all driven by citizen contributions of sightings across our land- and seascapes. Internationally, citizen science is now regarded as a genuine research approach that will play an increasingly important role in our understanding of the impacts of environmental change over large spatial and temporal scales. The Centre is now pivotal to co-ordinating citizen science initiatives from field to all-island scales, engaging with the full spectrum of Irish society, supporting individual volunteers to organisations across the public and private sector.

Having this significant data resource now allows us to undertake rigorous analysis of these data – leading to insights into species distributions and expansion or declines; to support the development of world-leading monitoring and surveillance programmes, to the use of species as indicators of change, including landscape and climate change, and informing policy – from invasive species to biodiversity status indicators.

The establishment and operation of the Centre has also illustrated the value of a particular contract delivery mechanism: It is a commercial enterprise with data analytics expertise that operates the Centre under long term service level agreements – Compass Informatics has influenced the digital data centric approach and the focus on data science. The company has also been able to bring the experience gained and expertise developed at the Centre to other clients and countries – with for example ongoing work with the South African National Biodiversity Institute, and the opportunity to expand ever further afield creating high value jobs and new data science approaches. The reverse is also true, with Compass Informatics contributing significant research and development benefits from its own resources to the Centre, ensuring that commercially, scientifically and socially that biodiversity is the winner.

We have a brilliant team and client organisations that have been hugely supportive to our team as individuals and to the company over recent months.  To say a thank you to colleagues and friends, the Compass Informatics founding company has made a significant donation to the Mater Foundation to enable new equipment to be bought and to further build the Mater’s medical capabilities.

We wish everyone health over the coming weeks as we all deal together with Covid-19. As a company we continue to work and deliver our projects with skill and focus, while following more flexible working arrangements and with extensive use of work-from-home.

As part of our continuing exciting growth, we have yet more positions available – each of them offering a great opportunity to be involving in delivering important work and in developing technical and project delivery skills.

Events, Latest News
We use cookies to ensure that we give you the best experience on our website. If you continue to use this site we will assume that you are happy with it.Ok